The easiest way to understand basic electrical theory is to consider the flow of electricity through a wire as being like a fluid flowing through a pipe.

We will consider two reservoirs connected by a pipe with one reservoir being higher from the ground than the other, and a pipe connecting them. 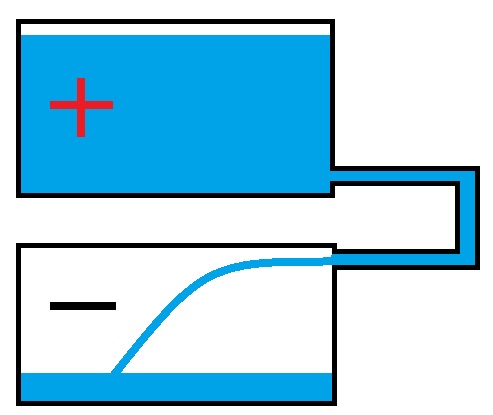 Battery analogy: Fluid moving between reservoirs through a pipe, forced by gravity.

What happens in this situation should be obvious. The fluid will flow until there is no fluid in the top reservoir above the level of the outflow pipe. Flow will be fast at first and close to the end flow will be slow.

Almost the exact same things are observed for a battery.

If we consider pressure the fluid exerts on the pipe it is similar to voltage in an electrical system.

The  flow of the fluid in the pipe is similar to the current in an electrical system.

I  measured in Amps  [Coulombs per second]

The diameter of the pipe is similar to resistance in an electrical system.

The total quantity of fluid in the system is similar to total charge in an electrical system.

This brings us to Ohms law, the most basic law of electronics:

Voltage is equal to current multiplied by resistance.

Warning: The diagram shows a battery in whats called short circuit configuration. short circuits should be avoided as they can lead to dangerous destruction of the battery.