A needle, more useful and more difficult to make than you think.

Why is this so significant?

Yes it is a needle, it is used for sewing materials together.

The reason it is significant is because it is the oldest tool ever discovered that was not designed for killing or eating.

The first tool of construction. Men and women made clothes and other usefull items from this one giant leap in technology. It’s our first actual tool of construction. Everything before it was a tool for cutting, chopping, crushing or stabbing. Most previuos tools made things smaller, except this one which made things bigger. The first bone needles were found 6000BC older than recorded civilisation itself, You might assume it was a prerequisite for civilisation.

If you still think the needle is insignificant, try to make one that works well. you’ll find it’s very hard to do.

Using this knowledge imagine what would happen when civilsation as we know it collapses. The factories that currently produce needles would likely cease production at least for a time. Trade and transport networks will be disrupted perhaps permanently. The production of new clothes would likey halt. People would have worn and damaged clothes and be perhaps unable to replace them. New clothes may become rare and expensive to manufacture. Clothes are made of woven threads, theads will not be scarce. Needles possibly will be. Needles will likely become quite valuable. It’s possible may become a form of currency or at the very least a valuable item of barter. It’s clear that needles will be far more valuable than they are today.

Less obvious uses for a needle:

A needle can be bent and turned into a fishing hook.

Needles can be used as pins for sewing.

Needles can be used to clean out a wound or prick open a blister.

A magnetised needle floating on still water can be used as a compass.

Needle can be use to clear a small blockage in a metal filter or small gague pipes.

Being more specific the compass points to align itself the strongest magnetic field, which may or may not be grid north, usually not.

The north pole where all the lines of the map grid connect, sadly is not the magnet north pole, the same is true for the south pole.

The south pole is not even under Antarctica, it is not even covered in permanent ice, its just off the coast of Antarctica in the southern ocean.

With the right ship you could sail to the magnetic south pole.

So because of this you will need to add a correction factor (magnetic declination) based on exactly where you are on the earth (and years since map printed). 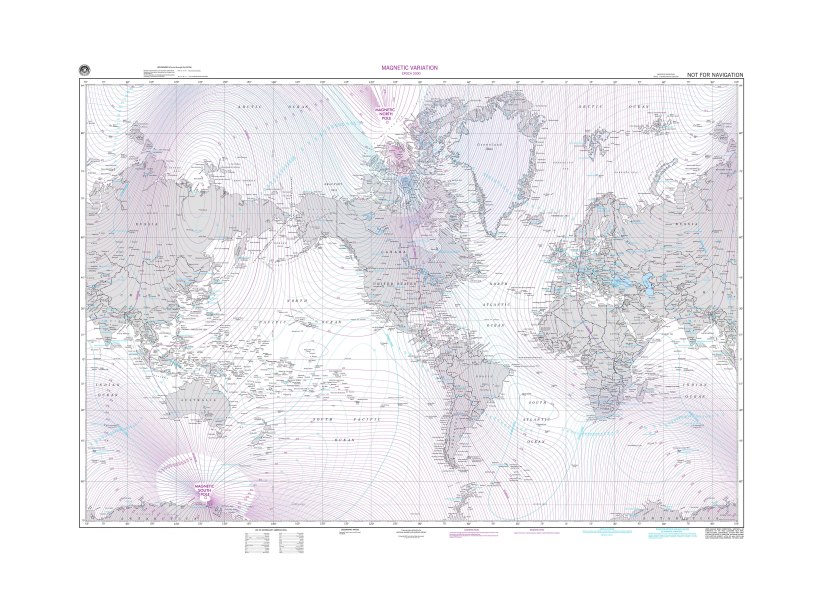 So what does this mean?

This will show you how much you compass be away from grid north when pointing to magnetic north and whether magnet north will be to the east or west of grid north.

in the area of former French Indochina Vietnam Cambodia, Laos and Thailand there is very little magnetic variation, less than 1 degree, so in that area grid north and magnetic north are almost identical.

For the USA and Canada the situation is much more complex

Magnetic declination for the USA and Canada

The declination becomes extreme in the  Alaska and western Canada areas.

Here the declination becomes quite significant, in Banks island the declination is around 40 degrees, being that the difference between East and North-East is 45 degrees, you would not want to get this wrong. 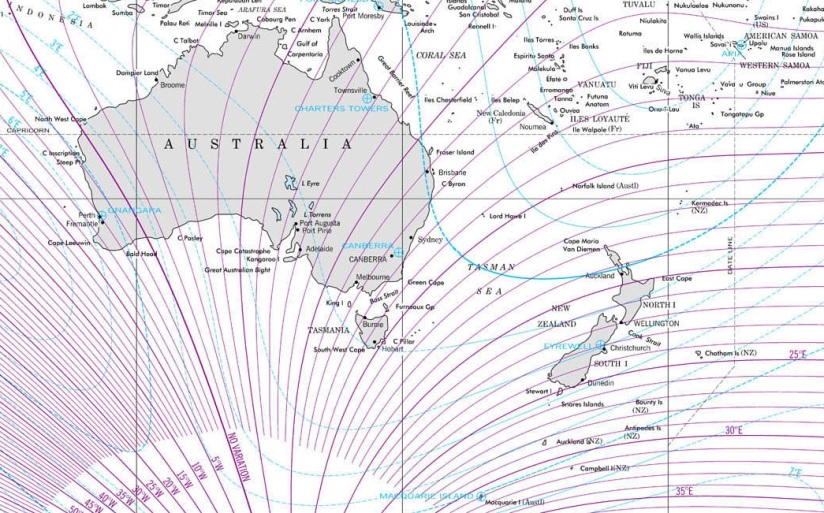 The declination problem is as extreme as the case for North America, the real issue especially for Australia is the magnetic anomalies.

You might recall that Australia is (in many places) simply made from iron ore, and iron is magnetic.

Magnetic declination (and the location of the magnetic poles) changes with time.

The measurements of change are in the above charts as light blue lines and are in the units of minutes per year ( 1 minute being 1/60 of a degree).

Here is an animation of the slow changes in declination over a 400 year period from the USGS.

Earth Magnetic Field Declination from 1590 to 1990

Please note the most recent data on the animation is from 1990 as i write this its 22 years out of date so the charts from 2001 are more accurate.

Find your declination based on your IP address

If you’re wondering where this numerical system came from, it came from Sumer, the first known civilization. While it seems like an awkward system at first, it is worth understanding, as it is completely embedded in geography, cartography navigation, astronomy and the measurement of time. Long after Sumerian was a dead language, scholars were studying Sumerian cuneiform to understand Sumerian knowledge of astronomy and cartography; all described in base 60: degrees, minutes and seconds.

Once a workable standard gets established, it gains considerable momentum.

For simplicity of mathematics we will arbitrarily assign east to positive declination and west to negative declination.  As north is considered to be 0 or 360 degrees on a compass this will make sence, 15 degrees east is +15 degrees 20 degrees west is 340 degrees (360 -20). Just like on a clock at midday it is 12 and the next hour is 1 and the previous hour is 11.

This is the same as saying how many minutes have passes in 11 45 second time periods.

In minutes and seconds?

A hand written calculation of the example. please note the carry of the 6, which is really carry the 60 minutes

So now that I have explained all of this and not even shown a picture of a compass you may be wondering about my logic.

Navigation by compass is not a simple affair, well not as simple as it appears once declination and declination change is taken into account.

The real importance of understanding declination becomes apparent once you are doing one or more of the following:

Attempting to triangulate your position from landmarks.

Making decisions based on precise measurement of where north or south is, such as a sundial orientation or solar panel placement.

In a location with large annual declination change ( Canada, eh ).

Learn the parameters of your tools.

There is nothing worse than having too much faith in a tool you really don’t understand the subtleties of.

I will add that in trying to explain all of this, which was 24 hours of research and writing, I learned a lot.

I hope you have learned a lot too. You’ll never think about North the same way again.

Even so unless I’m on the ocean, I say the map is far more important than the compass.